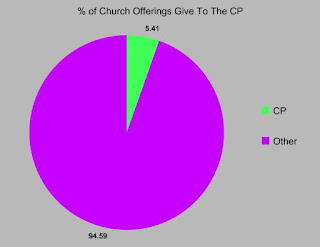 The latest data show that SBC churches give 5.41% of their undesignated offering plate dollars through the Cooperative Program.

This is the 2011 figure and it continues a slow, steady decline that is decades long. When I began my pastoral ministry in the 1980s the figure was over ten percent.

Even at the current percentage, the Cooperative Program is a mammoth denominational funding mechanism, providing hundreds of millions of dollars almost all of which goes to the mission boards, seminaries, and state conventions.

There may be evidence that the decline is approaching a floor. The most recent Cooperative Program survey showed that about one in seven pastors had either already led their church to adopt Frank Page's "One Percent Challenge," the latest CP increase program by the Executive Committee, or plan to do so this year.

The One Percent Challenge is a simple plan that merely asks churches to give more and it is about the only basis for a CP emphasis, absent any substantial changes given to the allocation formulas of the CP.

The graph below shows the percentage of offering plate dollars given through the CP that get to denominational entities, mainly the six seminaries and two mission boards. 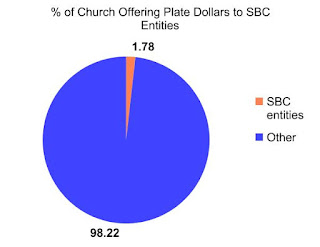 While most SBC churches give directly to our International and North American Mission Boards and would increase the tiny slice of the pie above thereby, one could say that our churches seem to find far more local priorities for their funds.

Nonetheless, that tiny slice means hundreds of millions of dollars to educate clergy and to send missionaries to North America and the world.


Posted by William Thornton at 7:30 AM