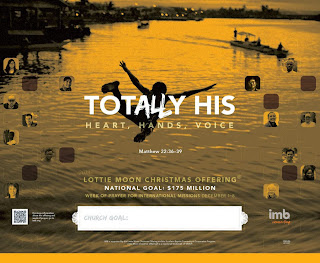 The Lottie Moon Christmas Offering for International Missions is our most important Southern Baptist offering and the best money that can be put in the offering plate. Most of the people who need Christ are across the oceans, not in North America. The LMCO, used for overseas needs, is critical to our main task as Southern Baptists.

We have hovered around $150 million for the last seven years. The offering hasn't hit the $150 million total since 2007 but last year was less than one million short of that figure. I expect that it will be surpassed when all of the 2013 offering is in and figures released. Two of the last five years have seen the offering decrease.

But let's be positive.

Consider what happened ten years ago, 2003.

The increase was an astounding 18%. We haven't approached that in dollars or percentages since. To achieve an 18% increase over last year's offering, Southern Baptists would have to give an additional $27 million and surpass the rather unrealistic $175 million goal we have had since 2009.

While I don't see anything that indicates such an increase is probable, it is certainly possible. My feelings here in the SBC hinterlands is that Southern Baptists are prioritizing their giving as never before and Lottie Moon is very high on the priority list.

While the Cooperative Program continues its long, slow slog downward as a percentage of offering plate dollars, the LMCO is increasing. We can do much better on both but the contrast is plain for all to see.

Many churches and even state conventions are sending gifts directly to the IMB, bypassing the Executive Committee and their state convention. One may like this, dislike it, or be ambivalent about it but it is a trend.

As a pastor, I always tried to increase our church's LMCO, even in the tough years. My wonderful congregations always did their best and gave just a little more.

Posted by William Thornton at 8:54 AM