The $43.5 million GBC buliding as an icon 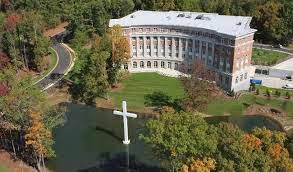 It is now debt free, the GBC being given a grant of $25 million or so from the Georgia Baptist Health Care Ministry Foundation to retire the debt. Some called the gift a "miracle" though it was not unexpected. The GBHCMF director explained that the Foundation was waiting for the right time to make the gift. We don't manufacture miracles, much less schedule a trigger date for them.

In addition to being appropriately ecstatic GBC leaders were careful to note that retiring debt is a biblical concept and that the GBC used to give a lot of money to the hospital before it was sold and the proceeds put in the GBCHCMF to be the source of grants for health care needs. In fact, the GBC leader, Robert White, even had a figure, adjusted for inflation, of how much the GBC had given to the hospital over time, $70 million. Toss in the explanation that GBC messengers approved the building and spending a bunch of times by votes and you've got some pretty sophisticated message management by GBC leaders and insiders.

But, why does a mammoth debt retirement bailout become something that needed to be cast with explanations, justifications, and message management? Can't we all just be happy about it?

Here's the answer: Somewhere along the way, the Georgia Baptist Convention headquarters building became an icon representing what many ordinary GBC pastors and laypeople are less than enthusiastic in supporting.

Did the ground shift under the GBC to cause this? Did we get carried away with ourselves? Did we get caught in the vise grip of declining church metrics and economic travails? Probably some of all of these.

But now we're going to reassess ourselves, so I read.

Let's see how serious we are about that.

Posted by William Thornton at 8:25 AM

Refresh my memory. What was the original plan for paying for the GBC building? Presumably, when the four votes were held in favor of the building the plan was not to use a bailout from the Health Foundation. Seems like I do remember the powers that be touting that "absolutely no CP money will be spent to build the new building." What was the financial plan when the debt was incurred?

You know why know body comments? Because no one cares. I am not being sarcastic or anything like it. But, money is still tight despite the rescue. And it was a rescue. We have wasted MILLIONS, AND I MEAN MILLIONS, on this and no one seems to care.

Lord deliver us from our desire to have the best instead of be the best.

I can't give you my identity because I could loose my job.

we had the opportunity to sell the building but didn't. Why? because the one who wanted to buy it associated with Horse racing. Hum!
Dr. White didn't KY have Horse racing? Any of your members, at your church, go to the KY derby? Just saying.