What did Lottie Moon look like? How about several different pictures of her?

Here is the photo I've seen most often.
This is what the International Mission Board uses most frequently. It is featured on her IMB bio page and is her Facebook profile photo. According to Regina Sullivan's new book on Lottie, the photo is commonly dated around 1870 about the time of Lottie first went to China. Sullivan notes that the "hairstyle is that of a schoolgirl, which suggests that the photo was taken in the 1860s." I'm with Sullivan on this and think that we can do better than this as our main image of dear old Lottie. What's she got in her mouth anyway?

This is from The New Georgia Encyclopedia. I assume it is from Lottie's time in Cartersville, GA where she was called to foreign missions. It's better than the schoolgirl photo.

This headshot was lifted from a 1905 photo of lottie with two other missionaries in China. I like it. Lottie would have been about 65. She is clearly a formidable woman. 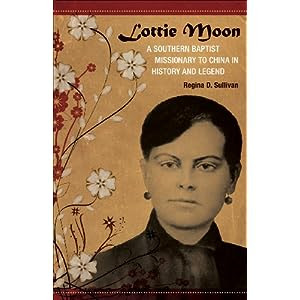 The photo for the cover of Sullivan's book is a charcoal portrait, date unknown. Looks like someone photoshopped Lottie to make her a woman of the 21st century.

Any of these are preferable to the schoolgirl photo.

What do you think?
Posted by William Thornton at 1:52 AM

Hello William, Came over from Voices. saw your comment on the Lumpkins issue.

I definitely do not like the one with the earrings on the book. I wear earrings, but in the other photos, Lottie does not wear earrings...why add them? dumb.

I like the one from the archives. the one just above the photo-shopped one. :) Glad you posted this. selahV

I didn't notice the earrings. The book cover looks like it is a copy of the one you like but updated to a 20th century look.

I agree with your thoughts on the photos. The cover image was cropped, but it wasn't altered significantly. If you look at the charcoal drawing itself, which is reproduced in the book, you'll see that nothing was added or manipulated. I think the earrings do appear quite modern, but they were not digitally added. Enjoyed the discussion!

Also, the portrait is held by the Virginia Baptist Historical Society. We could not include it in the book because they charge a fee to reprint it.

I agree with your thoughts on the photos. The cover image was cropped, but it wasn't altered significantly. If you look at the charcoal drawing itself, which is reproduced in the book, you'll see that nothing was added or manipulated. I think the earrings do appear quite modern, but they were not digitally added. Enjoyed the discussion!

if it's true about Lottie writing a letter asking them not to use that photo of her, then they were disrespectful in the extreme to continue to do it . . . it's that kind of disrespect towards a woman that should be strongly discouraged in any faith community, but that it happened to a Christian of the status of Lottie Moon says volumes

The Anglican Church respects her as a saint . . . she has a special 'saint's day' on their calendar of saints and she is honored there for her work and her personal sacrifice for the sake of Christian missionary efforts.

As to Ms. Sullivan writing a 'feminist' viewpoint, it looks like for some men in the SBC, anything approaching 'respect' for a woman in the Church who answers God's calling, is not appropriate. I think the CBMW thing and the ESS thing have got out of hand . . . marriages have been hurt by the 'submissive' heretical doctrine of the SBC, and women in general, even on THIS blog, are lectured and belittled by them what thinks its 'allowed' . . .

Lottie Moon, Christian saint . . . she put up with a lot of the road blocks and STILL came out ahead of all of the men in the SBC in terms of holiness and accomplishment. Even in her death, she is still an inspiration to many people, as she should be. If that is 'feminist', then maybe it's time to call a time out and re-examine some of the male idolatry going on under 'biblical' cover . . . now THAT would be a way to honor Lottie Moon that makes sense, as she certainly bore the cross of male persecution and still rose above the venom to bring Christ into the lives of countless Chinese people.

Misogyny has no place in the Church.